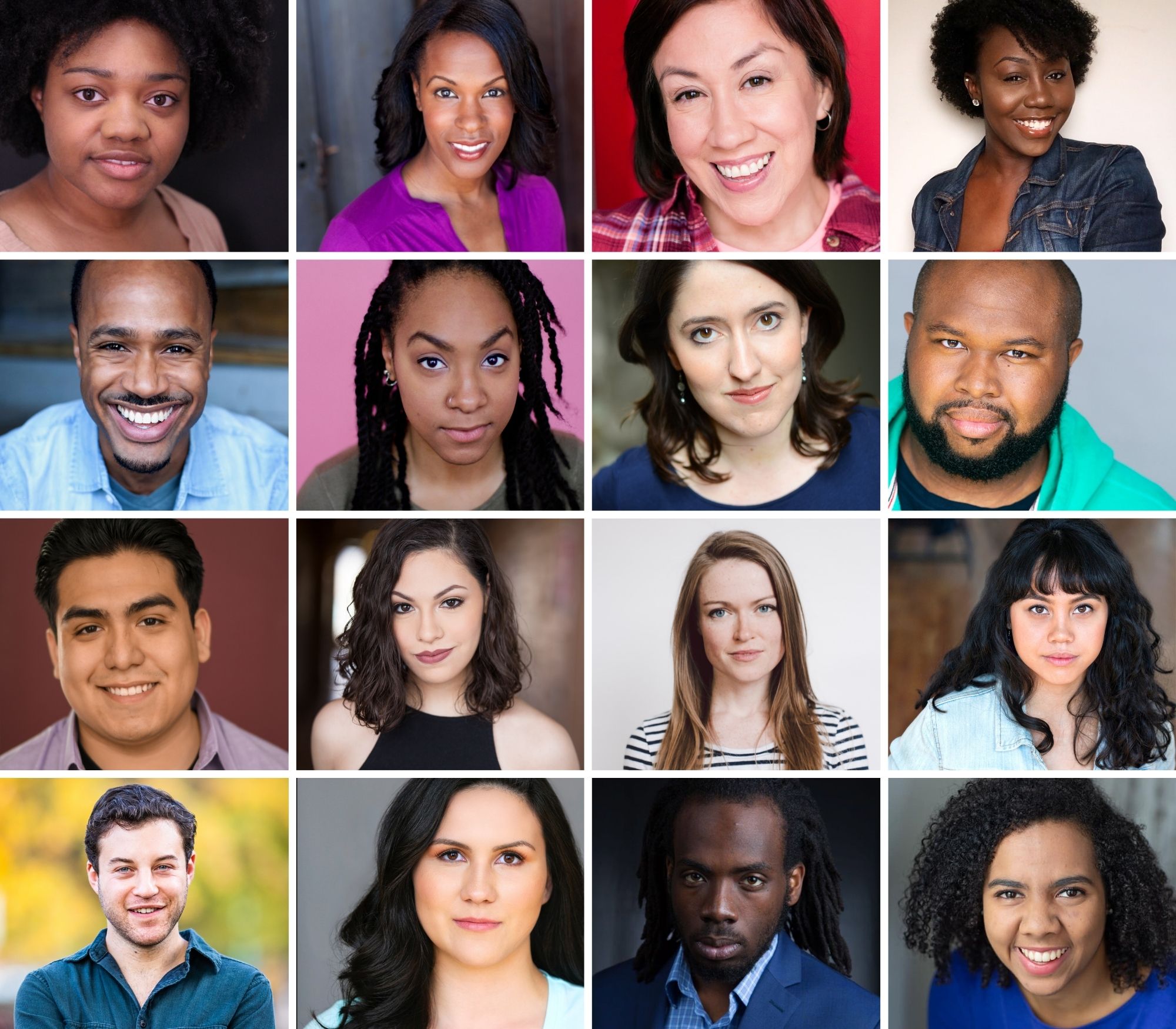 Tyra Bullock (she/her) is a Chicago-based creative, arts administrator, and teaching artist excited to join Steppenwolf's cohort of teaching artists. She holds a BFA in Acting from Oklahoma City University, where she first discovered her passion for devising socially charged theatre. Tyra is currently the Community and Education Partnerships Associate at Victory Gardens Theater, and a teaching artist for Northlight and Lifeline Theatre. Additionally, she serves as a proud member of the North Lawndale Community Coordinating Council's Arts and Culture Committee and the Marshall Square Resource Network's Peace Committee. She's also had the pleasure of performing and working for companies such as Oklahoma Shakespeare, Oklahoma Children's Theater, Ignition Arts, Pollard Theater, and GreatWorks Theater. Through her work, Tyra strives to create dialogue that promotes empathy and empowers individuals who feel unseen by society.

Kona N. Burks (she/her) is a professional actress and educator. She is honored to work with Steppenwolf Theatre as a lead teaching artist. She received her Bachelor’s degree from the University of Illinois at Urbana-Champaign and her Master of Education Degree from the University of Illinois at Chicago. She is also a graduate of School at Steppenwolf, 2012. Kona has been awarded a BTAA Award and Black Excellence Awards for Outstanding Actor in a Play. Kona is also a member of AEA and SAG-AFTRA. This will be her sixth year as a teaching artist in general, and her first year working as a Steppenwolf teaching artist.

Jazmín Corona (she/her) is a Mexican American and bilingual actor, writer, dancer, and photographer.  She has worked as a teaching artist with Steppenwolf for Young Adults since 2016. She has also had the pleasure of teaching with Northlight Theatre, The Viola Project, and Chicago Arts Partnerships in Education (CAPE), to name a few.  She has brought numerous works of art to schools all over Chicago. As an actor, she has worked with Steppenwolf, Goodman, First Folio Theatre, Porchlight Music Theatre, Free Street, Raven Theatre, and Babes With Blades, among many others. Her TV credits include NBC's Chicago Fire.  She is proudly represented by DDO Chicago.

Monet Felton (they/them) is a director, producer, writer, teaching artist, and company member at Jackalope Theatre. Monet earned their BFA in Acting at The University of Illinois at Chicago, where they currently teach as an adjunct professor for their non majors theatre class. They are currently studying on a scholarship to be certified in Alexander Technique. They have had the opportunity to teach at theatres such as Adventure Stage Chicago, Congo Square, Raven Theatre, Timeline Theatre, Walkabout Theatre, and Steppenwolf for Young Adults. Monet is a proud member of the Steppenwolf teaching artist cohort.

Charles Andrew Gardner (he/him) was born and raised on Chicago's south side. An actor, producer, teaching artist and SAG-AFTRA Chicago Local President, Charles Andrew Gardner has a passion for illuminating the stories of the underrepresented. Over the past decade Charles has a become an avid arts education advocate, teaching and mentoring with Dime Child, After School Matters, HHW, Steppenwolf for Young Adults, Goodman Theatre, and Timeline Theatre, through which he has reached thousands of Chicagoland students. Charles is also an on-camera acting professor at DePaul University as well as a faculty member at The Acting Studio Chicago. Charles is a Company Member with Timeline Theatre Company where he has appeared onstage in Kill Move Paradise (Jeff nomination for Best Ensemble, BTAA nomination for Best Ensemble) Paradise Blue (BTAA nomination for Best Featured Actor) and My Kind of Town (BTAA nomination for Best Actor) for which Chris Jones of the Chicago Tribune named him one of 2012s “Hot New Faces to Watch”. In addition to his work in the classroom, on stage and in front of the camera, Charles sits on the Associate Producer board at the Gene Siskel Film Center and is an advisory board member of Creative Cypher.

Jalyn Greene (they/she) is an actor, poet, teaching artist. They are driven to explore the intersectional black experience through poetic and generational narratives. Detroit born and Chicago based, they received their BFA from Michigan State University. Recent acting credits include No Child (Mississippi Bend Players), Queen of Sock Pairing as The Narrator (Red Tape Theatre), Crumbs from the Table of Joy as Ermina Crump (U/S) (Raven Theatre) and Breathe, Boom as Angel (Eclipse Theatre). Jalyn thrives on the belief that arts education is key in creating compassionate, bold, and effective leaders. Partnered with Chicago theatres and youth arts organizations such as Lifeline Theatre, Emerald City Theatre and Pegasus Theatre, they’ve provided arts programming to hundreds of students across Chicagoland, with an emphasis on communities with large minority and immigrant populations. Jalyn is also a member of the 2021 inaugural IGNITE cohort, under the mentorship of Nambi E. Kelley.

Jarrett King (he/him) is an actor, writer, and educator based in Chicago, Illinois. He has held a variety of administrative and educational positions with several local organizations, including Chicago Shakespeare Theater, Vagabond School of the Arts, Auditorium Theater, Hearts to Art, Silk Road Rising, Unsilence, Bravo Performing Arts Academy, and American Theater Company. Additionally, he directed Black Teen Lives Matter, a year-long, four-part virtual showcase of plays written by Black teens for Silk Road Rising, and is an Adjunct Professor of Theater at Loyola University. As a performer, Jarrett has over 15 years of credits in professional theaters across the country and in film, television and voiceover. He is the Associate Artistic Director of Penfold Theatre Company in Austin, Texas, where he has written two world-premiere plays, with a third currently in development. Learn more at iamjarrettking.com.

Alexis A Tornez Martinez (he/him) is a Chicago - based actor and educator who uses storytelling elements to confront issues within the Latinx communities. He is a graduate from the University of Illinois at Chicago with a BA in Theater and Performance. During his time in UIC, he has worked as an electrician and participated in projects with his peers to create wonderful stories. He is also a part of the cohort at Northlight Theater within their Speak Up! program. Alexis is a DACA recipient, who uses his experiences to create art that connects and responds to Latinx issues. Currently, he is writing a play titled “Checkpoint”, which confronts the issues, struggles, and experience of immigration. When he isn't on stage or in a classroom, he participates in other projects where he assists as an electrician or a photographer for his peers.

Ayssette Muñoz (she/her/ella) is a Mexican-American actor, educator, and director originally from the Rio Grande Valley. In 2015, the Chicago Tribune featured Ayssette as one of the “Top 10 Hot New Faces of Chicago Theatre''. And in 2019, she was nominated for "Outstanding Supporting Actor in a Play" from the Alliance of Latinx Theatre Artists of Chicago. As an actor, she's worked with many Chicago staples such as Steppenwolf, Teatro Vista, Goodman Theatre, Lookingglass, Chicago Shakespeare, Rivendell, A Red Orchid Theatre, Collaboraction, Definition Theatre, Urban Theater, and Teatro Luna. Her on-camera credits include 'Chicago PD', 'North of the 10' and 'En Algun Lugar'. Ayssette is a teaching artist with Steppenwolf, Silk Road Rising, Mudlark Theatre, Northlight Theatre, and The Viola Project. She is a proud Teatro Vista ensemble member and is represented by Paonessa Talent Agency.

Dana Murphy (she/they) is a theatre educator, movement artist, and grief doula in progress. They teach with Raven Theatre, Walkabout Theater, Creative Root at DePaul, Steppenwolf, Free Street Theatre, UIC and U of C.  They are passionate about fostering collective care, radical imagination, embodied relationship, and compassionate connection in their work. She trusts young people deeply and moves in collaborative relationship with students to create strong trauma-informed containers for their creativity to explore within.

Anastacia Narrajos (she/her) is a teaching artist, performer and theater maker based in Chicago. She is deeply introspective and curious about the world, and her work strives to make connections, expand imaginations, to synthesize and reflect. She has been a part of the Steppenwolf Teaching Artist Cohort since 2019. Her path as an arts educator began at The University of Illinois at Chicago where she graduated with a BA in Theater Performance in 2018. Since then she has worked as a teaching artist and facilitator across the city and is also a member of teaching artist cohorts at Lifeline Theater, Raven Theater, and Depaul’s Creative Root. Anastacia (or Ana for short) is an active theater maker with a focus on somatic practices and laboratory style theater making, is an ensemble member with Walkabout Theater Company, and is a lifelong learner. Her practice strives to center the healing and transformative nature of theater and art making.

Jeremy Ohringer (he/him) is a director, assistant professor, and teaching artist. In addition to Steppenwolf, he teaches at North Central College, Writers Theatre, Northlight Theatre and Chicago Youth Shakespeare among others. His favorite directing projects include STUPID F**KING BIRD (DePaul University), RAYMONDO (The Cartographers), ANGELS IN AMERICA: PERESTROIKA (Boston University), WHO WALKED ALL NIGHT… (Rhino Fest), SALVE REGINA (Center on Halsted), SAD SONGS FOR BAD PEOPLE (Rough House Theater), WHO ROWED ACROSS OCEANS (Edinburgh Fringe Festival) and an original adaptation of SPRING AWAKENING (Fearless Theatre). Jeremy is Vice-Chair of the board of The Midwives, a national collective of artists supporting each other’s individual projects. He holds an MFA in directing from Boston University.

Abigail Piñon (she/her) is an actor and arts educator who enjoys performing/writing/producing/teaching theatre, improv, and art all throughout the city. She is an ALTA-winning performer in the category of “Outstanding Improviser.” In addition to Chicago, Abi has performed and taught in cities such as: Austin, New York, L.A, San Francisco, Toronto, and more. She earned her Bachelor of Arts in Theatre and Performance, Minor in Disability and Human Development (with Honors) from the University of Illinois (Chicago). Abi's interests lie at the intersection of arts and access. She currently serves as Program Manager at The Warehouse Project & Gallery, a nonprofit org that focuses on utilizing innovative, artistic ways to create positive social change. Abi would like to give a shout-out to her family and loved ones who have supported her every step of the way, “Especially mi mamá, papá, y hermano who’ve always made me feel like anything is possible.”

Stewart Romeo (he/him) is an actor, carpenter and teaching artist on the scene in Chicago. Born and bred in Chicago, he began his work at the Goodman Theatre Youth Arts Program (originally known as G.T.S.) in 2013. While studying theatre at Tennessee State University, he participated in multiple shows and honed his skills as an actor and carpenter by working on each set he performed on. Upon his return to Chicago, he began working at Black Ensemble Theatre doing the same. He is an avid lover of the arts and arts education. Stewart is extremely excited to be apart of the StepEd cohort as a new teaching artist contributing to the development of the next generation of theatre participants.

THE RALLA KLEPAK FOUNDATION FOR EDUCATION IN THE PERFORMING ARTS