During the first week of rehearsals for …Miz Martha, playwright James Ijames, director Whitney White and artistic producer Patrick Zakem sat down to talk about the play’s history and its construction.

Patrick Zakem: James—can you tell us a bit about the genesis of this play?

James Ijames: I worked at a museum in Philadelphia for about eight years: The National Constitution Center. I love that museum. And while I was there, I would write these pop-up theater pieces that the museum would put in the rotating exhibitions. I did one about Rome; I did one about black mail carriers in WWII England.

And then I did one for an exhibit about Mount Vernon that was about a caretaker of the plantation in the 19th century. The exhibition essentially said, "Sure, they owned slaves... But look over here!" That's how the exhibition was structured: the heroic imagery was foregrounded, and slavery was the carpet upon which it rested. And I was like, “Oh, that's icky. I really don't like that.” So, I started doing all this research on Martha and George.

There were a lot of fraught and tense stories about Martha and her slaves. But I read somewhere that she freed her slaves before she died. I thought, "Oh, she had this amazing change of heart." But then I found a letter between Abigail Adams and Mary Cranch where they were discussing that Martha thought that her slaves were trying to kill her. And I was like, "That's spicy." And I thought that would make a good play. And I started working on it.

PZ: Let’s talk a little about the form of the play. There’s so much going on.

JI: At first it was sort of this melodrama, but then it just got exploded into this fantastical romp of a story. Because I think there's something surreal about being black in America. That’s why I keep using this style and form in my writing. Because it makes sense. That's exactly what it feels like.

I mean, I’m not a documentarian. I take a historical moment, idea, character, and I go with it. I did a ton of research on this play, but I didn't really end up using much of it. That wasn't what the play needed. The moment Martha enters a dream, I felt I could do whatever I wanted. I'm a true disciple of Suzan Lori Parks, and the sense that the American mythos is up for dismantling as a black artist. Like, it's actually my responsibility to go, “Yeah… we're gonna break this up a little bit.”

Whitney White: The form of the play is really thrilling. Structurally, I look at it two ways. The first way you can look at it is as reality and dream. In the way that you can look at A Christmas Carol, right? She's awake in the beginning, she falls asleep, she goes on this journey, and she gets spat out the other end. But the other way of looking at it is this kind of trip that goes deeper and deeper into a question.

When I was reading the play, I liked thinking that every time Martha fails to free the slaves, we've got to pull her deeper. She fails again to set the slaves free. All right, let's do it this way. At first, I thought the play had the structure of a mixtape, but mixtapes don't always escalate. Whereas games do. They have levels. I felt the best way to unlock those levels is to go deeper and deeper into bold understandings of Blackness. So even though the characters are coming at you as white figures sometimes, they are still interrogating Blackness. Like, they keep having to go deeper into stereotype and trope to wake her up.

PZ: Can we talk more about how stereotypes are used in this play? At times, it can be uncomfortable to watch.

JI: I’ve been thinking about how stereotypes can work in a similar way as vaccines. How a vaccine works is that it's this defanged version of whatever you're trying to vaccinate: mumps, measles. And you inject that into the person. When you think about it, you have to meet the thing. Whenever I get a flu shot, I get sick. Like for a day. And then the day after that, I have a rebound of energy and clarity and then I don't get the flu in the winter. Just don't get the flu. But that got me thinking. When we're talking about race and depiction of people, we resist recognizing the fact that stereotypes exist. And, I think for black people, living with the truth in that thing that I'm being asked to look at.

In this play, I try to deploy stereotype carefully. Yeah, we're showing you this, you know, minstrel act almost. But then we instantly subvert it and say, "So the violence that black bodies experienced when they watched this, now you will experience that." And now we will turn that into something else. Now we upend the expectation of your pleasure your entertainment at the expense of these bodies.

PZ: But that subversion can be hard to watch.

WW: I think it's important to just give audiences the gift of sitting alongside each other in a comfortable and uncomfortable way.

JI: There are a few things that I always want audiences to feel when they walk into something I wrote. First, your presence is already awesome. We're really glad you're here. And second, you actually cannot fail. There's nothing you could do in this space that is incorrect. Your experience is correct. If you have an emotional response to something, acknowledge it, embrace it, cry, laugh, whatever it is, but never read it is failure and don't let other people around you frame it as failure.

And if there is a moment in which you have a visceral experience of failure, examine that to ask yourself, “What’s actually happening?” If your response is that you feel like you’re doing something wrong by watching something, then there needs to be an examination of that. Where is that coming from? What is the lineage of that feeling?

Also—I get really angry when people shush people who are laughing really loudly or shush me. Because I’m a very loud laugher. There's no malicious intent in it.

PZ: Well, let’s talk about the humor of the piece! For a play that addresses the legacy of slavery so directly and frankly, the humor might be surprising.

JI: When I'm teaching acting, I talk to students about this. Physiologically, the things you need to laugh are the same things you need to cry. There's this nerve that goes from the ear, through the jaw line, past the esophagus, down past the lungs and the heart and into the diaphragm. The longest nerve in the body. What is fabulous about this nerve is that connected to what you hear, what you say, and your heart. All the parts that are needed to laugh, and cry, are along that line. 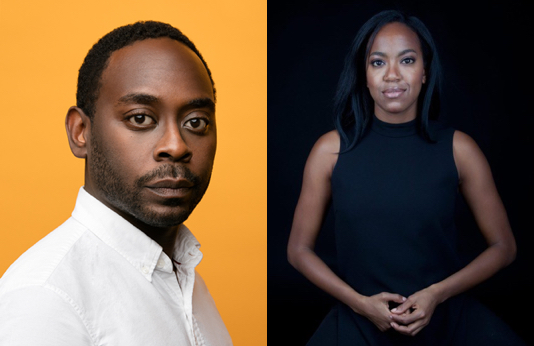